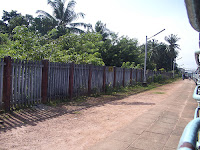 It is not a greatest place on the records of tourist books. A quiet suburb fittingly got a tiny railway station adjacent to a fleet of coconut groves.Iwill try to capture the moments I spent in that place as honestly as possible.Exaggeration at times transcends limits as I try to re live my rendezvous.
The kattanchaya or karuppatti was awesome to begin with. Later it turned very bitter to drink. I gulped it down. Tea was served by a lady who bore a traditional keralite smile bestowed upon her by anatomy of teeth.The station name " kazhakuttom " was written in hindi, english and the local language malayalam. The name plate is an old metal arch precariously bent resting up on a big tamarind tree. Foot paths cutting the dense grass or make do's as they say, adorn the lonely rails.Unlike parallel rails which never meet these make do's join and leave the rails on numerous occasions duly filling in as companions.

How often we find a vinayaka temple adjacent to a railway station ? Kazhakuttom is not missing out either.May be Vinayaka loves train so much.The evening passenger to kollam is yet to come.A stray dog wandered up and down the platform without any purpose.How am I saying it had no purpose. May be it had some purpose how do we know ? I got seated comfortably eagerly waiting to see a train.Seats on the platform are a gift to sit. You dont often get a better seat. Try it and tell me. Smiles got exchanged from opposite platforms. Wave of hands and a sense of fulfilment filled the realm of workers going back home.
Distant horn and rumble of the oncoming train woke the station from its slumber.Casual looking station guard checked the signals and kept his flags ready.The train is not the expected passenger and it is not meant to stop at kazhakuttom. It had a good speed.The arrival was ceremonial with a long horn and a ever increasing rattle of its wheels.Blend of its horn and wheels' rumble made every one look up and see the train.Even lovers seated at far end were forced to break their trance.

As the train crosses your eyeline,those where moments of glory for the train.Massiveness blended with speed leaves you dumbstuck.We feel as though we share the glory by merely watching the train's progress.It was all done in a quarter a minutes' time.Everyone paid due respect to it.It commanded it.Rhythmic friction between the track and wheels makes good music to one's ears. The platform gently yields to the pressure of the pace of the train by little quivers.Those quivers with the train's horn takes you to an elated state.The kollam passenger came.Only few people alighted and few boarded.`Silent meaningful glances` were exchanged for the last time of the day as the train rolled out of the station.Chirping birds and distant game of foot ball took the station back to silence. I could read the faces of people alighted. The pleasantries and grievances of the day are spilt in the train. It made their hearts lighter and their distant dreams seem closer.